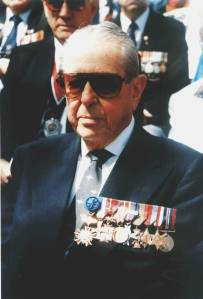 Born in Warsaw on the 12th of May 1915. Mother dies on the 18th of December 1915. Brought up together with her older sister Rena by Emil Waydel — maternal grandfather and the aunt Dzincia. Father Jerzy — engineer emigrated from Russia to USA, and married Leonie, de domo Krajewska a stepmother and returned to Poland during the 1920 war to take him and sister to the USA. At the age of 5 resolved not to go to America purposely contracting measles from the cousin (1st great coincidence of his life).

Matriculated in 1933 from Jan Zamoyski College in Warsaw, he attended military training at the Cavalry Training Centre in Grudziadz. In 1934 entered the Warsaw Academy of Economics & Commerce. During studies in 1936 obtained scholarship at great Britain receiving “Cambridge Certificate of Proficiency in English”. In summer of 1936 met Mr. Majewski — Polish Council in Cape Town and decided to write graduation paper — “Present & Future Trade Between Poland & SA”. After completion of studies applies to join foreign service and gets the job in SA — arriving in Cape Town on the 16th of November 1937 (2nd great coincidence of his life).

Enlisted in 1939 from SA to fight in the 2nd World War. Served in Battle of France in famous Gen. Maczek’s Armoured brigade (episode with Maj. Zgorzelski who never took cover). Escaped via Spain and Portugal to Glasgow, Scotland. Served in 1st Polish Armoured Division which was reorganised in Forfar, Scotland. Called to be Army ADC to the Gen. Sikorski — Prime Minister and Commander in Chief of the Polish Forces. On the 4th of July a943 Liberator carrying Gen. Sikorski crashed into the sea. Instead of Zygmunt who originally was assigned for the trip the Naval ADC Jozef Ponikiewski lost his life (3rd great coincidence of his life).

Took part in the Allied invasion of Normandy. Demobilised in 1945 left Great Britain for SA arriving again in Cape Town on the 22nd of July 1946. Started new professional career in marketing begining at Maconochie Bros for 2 years, followed for 11 years in American Muller & Phipps and finally for 12 years in Simba-Quix working as marketing director until 1978, consulting in the food industry until retirement in 1988. Problems in the family life, divorced in 1958 from first wife Sheelagh Fyfe-Jameson, havingdaughter Anna Maria (16) and Dominik (9) to look after. In 1963 married Anna Sophie Fluri of Swiss origin, widow of William von Bohlen. Lived happily for 37 years.

Have lived through incredible winds of change in Africa. Member of the Polish Ex-combatants Association, founder member and former chairman (1954-1957) of Polish Association, formerly Polish Settlers. Chairman of the Warsaw Flights Commemoration Committee for 30 years (1964-1994).

But what about the Man himself? How do I remember Zyg as we affectionately did know Him?

We met in 1971 in the old Polish Club at the Solomon Street. He always had this air of the men of the world, smartly dressed, well spoken in both languages, which I could judge, and most of all extremely pleasant. He would have made an excellent diplomat, history permitting. Always with Anna at his side, politely seating through the meetings conducted in Polish, supportive, loving, understanding. Great cook, smart lady, fantastic host. He was indeed lucky to have the woman of this calibre on his side.

Although he was proud enough not to make fuss about it, communism in Poland and Jalta betrayal deprived him of what would have been a happy ending to his military career. South Africa has, like for the most of us, made it possible to enjoy the life, which otherwise would have been flawed. As the chairman of the Warsaw Flights Commemoration Committee he did an excellent job. His military upbringing was helping him to manage commemorations with unsurpassed excellence.

Unfortunately, deadly disease took its root. He did cling to live for another 2 years, mostly to be there as support for ailing Anna. Our thoughts are with Anna, Dominik and Anna Maria — his closest relatives.

May good Lord accept him into the kingdom for the well earned rest.